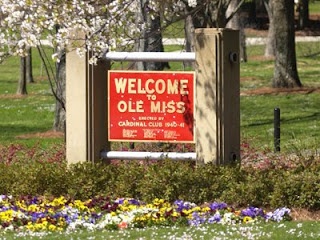 Many Ole Miss people remember the Cardinal Club and have seen its “Welcome to Ole Miss” plaque where University Ave. meets the Grove and its signature light in front of Fulton Chapel. Inactive for 40 years, the Cardinal Club has returned.

In an effort to restructure the Student Spirit Committee, the Associated Student Body at Ole Miss has reorganized it as the Cardinal Club, bringing back a more than 80-year-old tradition this summer.

Ole Miss student Peyton Beard of Tupelo, the director of athletics for the Associated Student Body, is heading up the efforts.

“One of the goals of my platform was to restructure the Student Spirit Committee,” said Beard, the first president of the revived Cardinal Club. “One of the main goals of the Cardinal Club was always school spirit and trying to get the freshmen involved early, get them to understand the Ole Miss spirit and traditions.”

An early football season pep rally is in the works for this fall. Definite plans for that have not yet been set. It will likely be in conjunction with the first home game vs. Southeastern Louisiana. Plans also include a yell practice for fans and students, especially freshmen and transfers.

“A lot of them won’t know the cheers, and we’d like to add more excitement to the games and make the atmosphere more electric,” Beard said. “And we might even be able to develop some new traditions.”

The Club is sponsoring a “Game in The Grove” Thursday, Sept. 24, for the Ole Miss-South Carolina contest, televised by ESPN. A large screen will be set up on the Grove stage, much like the one for the Presidential Debate last fall. This event will be for all fans as well as students who can’t make the lengthy trip on a school night.

“We want this to be a fun event for everybody,” Beard said. “We want it to be a regular Grove atmosphere. Being on a Thursday makes it hard for students to attend the game. Hopefully they’ll watch it in the Grove along with fans from the community. It will be fun having everybody get together.”

Another planned activity is a “Rebel Road Trip” which is set for the Auburn football game Oct. 30-31. This is for Ole Miss students. The Club is currently looking for sponsors for this Rebel Road Trip effort to help keep costs down for the students who will attend.

And it’s not all about football. The Cardinal Club hopes to also have some events in conjunction with basketball games, baseball games, and other contests, like the Student Spirit Committee has done in the past.

The "new" Cardinal Club isn’t intended to be a large group of students. The organizers hope to keep it around 30 members who work hard at organizing and carrying out the events surrounding Ole Miss sports.

“In the past, I’ve been a part of the Student Spirit Committee, and the number signed up was large,” Beard said. “But attendance at the meetings was small. We might have 60 members but only eight or 10 would show up. It wasn’t the organization that it started out to be or that it could be.”

So a new direction was decided upon and just in time for what should be an exciting sports year in 2009-10. Those involved are serious about their efforts to make it work.

“There is an application process, and there is also an interview,” Beard said of potential members. “We will choose members from that interview process. During the summer orientation, there was a table set up with information about the organization and the events for the fall. We’ll do that again during Welcome Week when school starts.”

Since its beginnings in 1927, the Cardinal Club served several different roles and functions, from social activities to school spirit.

“It really started out as a way to greet and entertain visiting teams,” said Sovent Taylor, the group’s advisor and also an alumni assistant and club coordinator with the Ole Miss Alumni Association. “Surprisingly enough, the first team they greeted and welcomed to campus was LSU. It was never a huge group, only 20 or so. But it was an important part of Ole Miss for a lot of years.”

But after 1969, for whatever reasons, it ceased to exist.

Now seemed like the perfect time to revive it and allow it to be a driving force behind school spirit.

“There’s a lot of hype going into this season,” Beard said. “It’s a lot different this summer. Some students didn’t even show up at games in the past. Now people are even talking about SEC championships. With the success of last football season and with the outlook for the future, everybody’s so excited.”

And for the first time in 40 years, the Cardinal Club will be a part of it.
Posted by Hopson Plantation at 5:49 AM